Who can find a virtuous wife? For her worth is far above rubies.
~Proverbs 31: 10
​I should’ve left sooner. There’d be less blood if I hadn’t waited so long. But Brian was so sick. I couldn’t have left any sooner than I did. I
know that, if I’m being honest.

Six straight days of him drinking and denying it to me. Four days I avoided phone calls and texts from church members. Where was Brian?

​Was Pastor okay? Why had he missed prayer meeting on Tuesday and Bible study Wednesday? I ignored them and activated the prayer chain. Vague. Effective. They’d all think he was sick with a stomach bug. At home, I ran interference with our boys. Pleaded with them to let daddy rest, to stop knocking on our bedroom door, to keep it down. Took them to the park twice a day and slept on their bedroom floor and walked them slowly through Walmart and spent long afternoons outside watching them play.

Five more days and Brian emerged from the bathroom like a manic newborn, scrubbed fresh with a wild-eyed, passionate sobriety. Again. His apologies lasted two days. Emphatic. Persistent. Full of promises and conviction, like he was saving my soul instead of his own. And then one morning, he went back to work at the church bright and early. When he left, I looked at the calendar and called for an appointment. I was careful to avoid thanking God after I’d made one.

My phone predicts 47 minutes travel one way. I leave the house so fast, I forget to feed Miller first. When he screams in protest at his brothers’ attempts at distracting him, I pull over and nurse him in the front seat, waiting until his eyes go heavy and milk slips from the corner of his mouth.

“How much longer?” Deacon asks again. Cars zoom past and their speed rocks our dirty, white minivan where we sit idling on the two-lane highway shoulder. I resist hurrying the baby to finish and glance at the clock, then look over my shoulder at my boys.

“Just a little bit further and we’ll be there,” I tell my 7-year-old. His too-wise eyes don’t meet mine, locked on the device in his lap. Gaze hidden by the enviable, dark lashes he gets from my husband, he only nods. I tuck myself back into my bra.
“Mama, I’m hungry,” Hudson whines. Four-year-old legs kick the seat and he tugs the booster seat straps over his chest with irritation. “I wanna get out.”

I turn and scoop Miller into his car seat. Tuck his doughy arms in beside a pastel bear and adjust my seat belt, pulling back onto the road. Miller shudders and smacks petal pink lips in his sleep.

They should’ve stayed with Brian. Maybe he was sober enough today. I should’ve called Kaylinn or Mary Pratt or Cece from the youth group to babysit. I could’ve been there and back in 3 hours, tops, if I’d gone alone. But how would I have explained a doctor’s appointment in Orlando? What lies would I have needed to tell about why I couldn’t go to Bartow or Lakeland? No. Better to take the boys with me and hope there was a little waiting room; someone to keep an eye on them. Surely, it would be fast. I’d be fine. We’d be fine.

I should’ve brought sunglasses. I should’ve worn a hoodie. But it’s still 80 degrees three weeks before Christmas and maybe no one will see us. Ft. Meade is such a small town and a world away from Orlando. No one we know should be within an hour’s drive of this place. No one would guess I’d come here. Not with my sons. Not a woman like me. No one notices Brian’s drinking, maybe I can get away with this. Maybe it’s a slow day at the clinic. They’ll be fast. So fast I won’t have to argue with myself anymore. So fast I can outrun the guilt.

In the exam room, I glance down at Miller. He’s oblivious, still strapped into his car seat. It rocks on the scuffed, white tiles when he reaches chubby hands to find his bare toes. Hudson and Deacon’s voices bleed through the exam room walls, muffled and busy, entertaining an intern with little boy jokes and stories and quizzes while cartoons play in the background.

I’ll never be. Maybe no one ever is. How could ever I be ready?
​
I nod and take a deep breath, hold it when the chilled speculum sears my skin. White paper crinkles in my fists. Ceiling tiles blur and then disintegrate. A machine whirrs and buzzes, drowning out my boys’ voices. Tapping starts. Unmistakable suctioning noises, like vacuuming lines into carpet. Back and forth, back and forth. Tears slide over my cheeks, filling my ears. My eyelids quiver, slammed tightly together.

A nurse pats my hand, squeezes my knee. There’s all these church members who I call sister and this stranger knows me better than any of them ever will. We lock eyes. I remember being in labor with the boys and focus on her lashes--impossibly pale, like crayon sunbeams.

“Shhhh. Shhhh. Almost done,” she says from behind a mask, and I nod again.

I’m rationalizing. I’m a sinner. I’m the whore of Babylon. I’m a strange woman with a lukewarm faith, murderous as Jezebel and twice as deceptive. But I knew the moment I said “yes” to marrying Brian I’d never leave him or this town. This will keep our heads above water, keep my husband from drinking so much we can’t hide it anymore. Maybe this counts as virtue if I’m doing it for him; to save him the stress of another baby. Maybe God will forgive me. Maybe I’ll still go to heaven.

Safe in his car seat on the floor in the corner of the room, Miller is asleep again, lulled by the vacuum’s white noise.

Later, Brian walks in the door for dinner, his face long and pale. The feisty, determined excitement of his rebirthed sobriety has dulled. Everything he abandoned during a bender still sits on his desk, plus Mr. Salazar and Mrs. Jenkins have both died, so there’s Sunday to prep for and two funerals to preach now, too. Responsibility drags through the house behind him like an anchor. I meet him and the boys for pork chops and macaroni and cheese and English peas at the table and mask my face with a smile, ignoring the warm bloom of pain dancing through my gut.

“You boys been good for your mother today?” my husband asks, stabbing at a chop with a blunt fork.

“What did you all do today?” Brian asks us, eyes on his plate as he digs in, gaze hidden by the thick, black lashes he shares with our children.

“Nothing much,” I say, reaching for my water. Heated pain in my gut makes me nauseous. My hand shakes as I reach for water, but condensation on the amber glass almost makes me drop the glass.  I stuff a shaking hand under my thigh instead.

“Stephanie read to us about callapitters,” Hudson says. He nods, bright-eyed and enthusiastic, looking from his elder brother to me for corroboration.

“From the doctor’s,” Hudson says. “She’s nice. She gots brown hair like Dora the Explorer.”

“What doctor?” Brian asks Hudson before looking to me. “Who went to the doctor?”

I roll my eyes and fake a charmed smile. “It was nothing. I had a check-up.”

“I didn’t know you had a check-up today. I could’ve kept the boys.”

“I made the appointment weeks ago,” I lie, knowing how to shame him into silence--how to secure any secret. “While you were sick.”
Knife and fork stilled above his plate, Brian nods, gaze falling. Deacon reaches for the ketchup bottle and noisily baptizes his pork chop.

“She’s real nice,” he says. “She let us change the channel off the baby shows.”

Brian glances at our son and then to me for interpretation.

“Waiting room,” I explain with a shrug. I force down a bite of food. “No big deal.”

My husband nods and chews slowly. Down the hall, Miller cries as he wakes in his crib. I stand to get him, tossing the napkin from my lap onto the chair.

Pain lances my belly as I walk, a hot knife of accusation. I reach into the snug crib and Miller stops crying, pawing at my shirt hungrily as I scoop him up. I free a breast to feed him and blood seeps into my underwear. I hurry to the bathroom and the door clicks locked behind us as Miller latches on. Blood gushes into the toilet under me while he nurses, a red pool of loss. When the baby switches sides, I yank off my bloody underwear and stuff them at the bottom of the trash can under the bathroom sink. My cheeks are bright red when I look in the mirror--shame and heat and secrecy and frustration. I flush a bright bowl of blood and watch it swirl down the pipes. It drains away, buried in the ground next to the vodka we splashed down the sink last week. My blood and my husband’s liquor. All our secrets buried together beneath our foundation.
​
A couple Tylenol will be enough to take the edge off. I can say a few more things to make him go to bed early; maybe he won’t want to have sex for a while. One day we can try again.  Maybe this one was a girl. 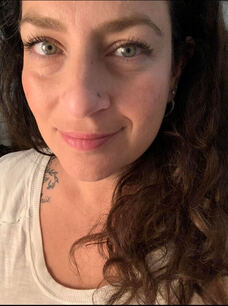 Esty Loveing-Downes is a mother of five, a wife, former nurse, and a full-time undergraduate student pursuing a Creative Writing BFA at Ringling College of Art + Design in Sarasota, Florida. As a Jew raised in evangelical purity culture, she writes about religious colonization and unapologetic women full of chutzpah and grace. She has work forthcoming in Sarasota SCENE magazine and Shift—A Journal of Literary Oddities.
Art: No Parking, Part 1 by Kristin LaFollette