From 1941 to 1945, 15,000 children passed through Theresienstadt (Nazi propaganda, transit and concentration camp in occupied Czech territory). Although forbidden to do so, they attended school. They painted pictures, wrote poetry, and otherwise tried to maintain a vestige of normalcy. Approximately 90 percent of these children perished in death camps.
~U.S. Holocaust Memorial Museum
​
The number on my grave marker, 13, you think unlucky,
but I choose this number to tell you my story. On my 13th
birthday I became a man, memorized

13 foundations of Judaism, learned to take what comes
in this world. Could Maimonides know I played violin in this camp?
Strings for Krasa’s Brundibar, opera of resistance

in my native tongue, incomprehensible to a Nazi.
Notes escaped out barred windows, across barbed
wire pastures, to a world deaf to the sounds of death.

As I played, father and mother boarded a train to Auschwitz.
No longer could I lift my violin.
I joined them, crossed over to this resting place,

number 13 on a day of countless lost, to remind you
I exist. 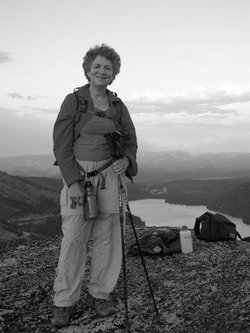 Irene Lipshin is a poet and photographer who spends summers traveling and reconfirming her belief that we share the human story of loss and gain, personal, political and global, throughout the world. Her work has appeared in Rattlesnake Review (as well as a chapbook, Shadowlines from Rattlesnake Press, 2006, and a littlesnake broadside); in Poetica, Chaparral Updrafts, the anthologies, We Beg to Differ and Outcry: American Voices of Conscience, Post 9/11 and on the Poets Against the War and Voices in Wartime websites, as well as other publications.