Her infant body bobs below
the chlorinated surface,

over and over she goes under,
screams and chokes each time

her mouth opens into air--
A primal howl ricochets

off concrete walls, trapped
in echo. At the child's side

an adult in a wetsuit
marked Instructor stands

in shallow water, submerges her
and waits for the babe's face

After each lap of breaststroke
I return to stare, pretend

to adjust my goggles
watch her not drown,

near drown, on a loop
that won't relent. She's learning

not to swim, but to self-rescue,
roll onto her back to float,

find breath and repose.
But these are foreign lessons,

she can't understand or consent,
only panics for her next breath

while her parents stand by, detached.
This is for her own good, and theirs,

they come to spare themselves
an accidental loss. First

you teach the child
what it is to drown

so she'll know
to save herself.
The Fairlies selection in each issue of West Trestle Review features a reprint poem or story written by a woman of color or non-binary writer of color and published at least one year ago in a print-only publication. "Mirabella Pool" originally appeared in The Cape Rock, 2017. 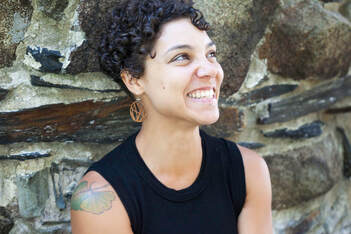 Rage Hezekiah is a New England-based poet and educator, who earned her MFA from Emerson College. She has received fellowships from Cave Canem, MacDowell, and The Ragdale Foundation, and is a recipient of the Saint Botolph Foundation's Emerging Artists Award. Her chapbook Unslakable (Paper Nautilus Press) is a 2018 Vella Chapbook Award Winner. Stray Harbor (Finishing Line Press, 2019) is her debut full-length collection of poems. Hezekiah’s poems have appeared in The Academy of American Poets Poem-a-Day, The Cincinnati Review, ZYZZYVA, and several other journals and anthologies.
Art: Public Domain