Yearly Report to My Mother on the Anniversary of Her Death

He never separated out your lot, never found
the wedding ring he bought,
small diamonds, Ascher cut, white gold,
gone.
​
Was it stuffed between piles of magazines?
In a floor vent somewhere as you
wandered the halls at night,
turning on all the lights, carrying the death
certificate of your brother in your pocket?

Afternoons, I find him in front of the TV,
eating saltines with raspberry jam,
or sometimes, asleep.
His fingers curled around the remote.

Yesterday, he told me,
when he thinks of you his tears
live in his throat.

Shopping Day, he wrestles with the cart, his cane.
Sometimes wears clothes
with stains, feels each
turnip, cucumber, apple.
Inspects each blemish with
the eyesight in his
fingers.
He’s memorized the store.
Counts steps under his breath, and somehow, he knows.
How to choose a Gala over
a Granny Smith, a Cremini over
a Button.

Shoulders bowed, he wheels the
carpeted hall, stops to tap
the thermostat, his pegged fingers
twisted, arthritic. Reaches
for a worn washcloth, damp
from last night’s use.
I brush his false teeth.
His silent rage, a tunnel of purple.
He would rather believe in miracles,
his bladder cancer cured; his kidneys resurrected.
After midnight, he tries to get up, go with whoever has come.
He hears trumpets.
There’s purpura on lips, right ring finger, scalp,
the vagabond odor of blood,
Surrounded by vapors, he talks to me,
is comforted I won’t leave.
Laying my head on a loveseat near him, close
enough to hear him breathe,
he thinks I am you.
When he can, he touches the velvet cover
of the box that holds you.
January / February 2023 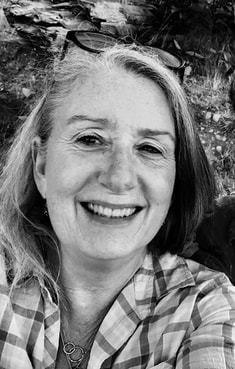