who it turns out preferred evening so we argue
over morning vs. mourning which is wholly

innocence, youth, opportunities missed or misused not
to be confused with regret and further, to clarify, melancholia

is like the lingering ache of dryer lint, the last of it you can’t
get rid of—itchy steel wool suit of shitty mornings that

and you’ll sort through the sock drawer of grief, unmatched
by your own melancholia tentacles and turn away from reality

these words are not really for Freud—more for the orioles, kingfishers,
lowly house wrens with their muddied red caps, more for the dog

who will always find his way home. This is what I wish for you. 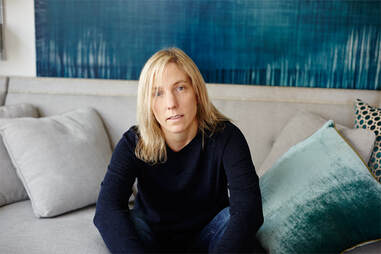 Photo credit: Lou Rouse
Emily Franklin's debut poetry collection Tell Me How You Got Here was published by Terrapin Books in 2021. Her work has appeared in the New York Times, Guernica, New Ohio Review, Cincinnati Review, Blackbird, Epoch, The Rumpus, River Styx, and Cimarron Review among other places as well as featured on National Public Radio and named notable by the Association of Jewish Libraries.
Art: Creative Commons