To say he ghosted me
insults ghosts,
My haints linger
in healing clusters.
When I need them most,
they drop a coin heads up.
leave a feather on my path.
flicker the streetlights
in a show of solidarity.
So no. He did not ghost me.
he did the most humanely thing—
left without explanation,
an intentional taking of my heart
His silence is a violence,
a quiet war I battle,
with someone I was becoming to love.
His leaving suggests another side of him
I did not see. My eyeglasses tinted rose.
I don’t always see red flags clearly.
I’m left with an unknown.
He did not ghost me.
my ghosts comfort.
They don’t leave,
they cleave. 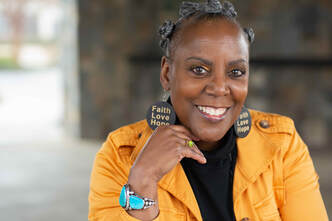 Glenis Redmond is an award-winning poet and teaching artist from South Carolina. She travels nationally and internationally performing and conducting poetry workshops. Redmond has been a literary community leader for twenty-eight years. She is a Kennedy Center Teaching Artist and a Cave Canem alumni. Redmond has been the mentor poet for the National Student Poets Program since 2014. In the past she prepared these exceptional youth poets to read at the Library of Congress, the Department of Education, and for First Lady Michelle Obama at The White House.

She is a North Carolina Literary Fellowship Recipient and helped to create the first Writer-in-Residence at the Carl Sandburg Home National Historic Site in Flat Rock, North Carolina. Her work has been showcased on NPR and PBS and has been most recently published in Orion Magazine, The New York Times, The North Carolina Literary Review, Obsidian Literature and Arts in the African Diaspora, StorySouth, About Place and Carolina Muse.

Redmond has published three books: Backbone (Underground Epics), Under the Sun (Main Street Rag), What My Hand Say (Press 53). She has a chapbook, The Three Harriets Others forthcoming with Finishing Line Press in February of 2022. Her fourth full length book, The Listening Skin will be published by Four Way Books. Also in the same year, she has another book Praise Songs for Dave the Potter, art by Jonathan Green along with Dr. Gabrielle Foreman and Dr. Lynnette Overby that will be published by the University of Georgia Press.
Art: Beneath the stars, Oormila Vijayakrishnan Prahlad