my grandmother calls me apo,
still strokes my hair and asks me how I’m doing,
as though I haven’t been away from her for two decades.
as though I haven’t spent half my life torn from my culture.
my grandmother spends her time talking
to me in Tagalog, the language dripping from her
tongue like honey, words flowing like water around a smooth stone.
Tagalog sticks in my throat. it sticks in my throat and
chokes me from the inside out. one time my grandmother
came to visit us, hauling her age-worn body across
borders just to see me and my un-Filipino brothers,
just to see how another culture has made a mark on us.
how another culture has trekked through our bodies
and formed a trail that no matter how much time passes
will never be covered in ivy and grass again.
when my grandmother was with us, I listened to her voice.
the scratch of it, how the dust-filled streets of
The Philippines has exhausted and formed it into something new.
and yet – my grandmother tells me of her time in
another country, of her experience living as an immigrant.
I almost do not believe it – this woman, my grandmother,
the most Filipino woman I have ever known,
prying herself away from her home country,
settling into a stranger’s embrace. she doesn’t tell me
about everything she’s experienced in that other
country. she tells me of how she came back home.
and I think of how she says the word home – bahay –
the words holding on to the roof of her mouth,
as though it were their home. I love the way she says it.
with no prejudice, no afterthought. she says the word home the
way I’ve never been able to. swallows the word Pilipinas
the way I’ve never been able to swallow. my grandmother
never treats me any different, still sees me as her
apo, still takes me in her arms and tells me
I am enough as I am.
I am enough as I am. 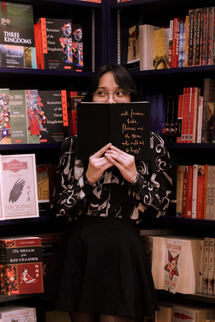 Isabella Dela Cruz (she/her) was born in the Philippines but raised in Singapore. She now has two places that she considers home. You can find more of her words (or just say hello!) on her Instagram and her Twitter at  @isabelladwrites.
Art: From the beginning, Oormila Vijayakrishnan Prahlad