All water has a perfect memory and is forever trying to get back to where it was.  ~Toni Morrison
Sunday afternoon, my mentor and I walk
through the nature in her neighborhood.
It drizzles. A hurricane heads our way.
Tired trees waver in the wind. I do too.

Her steps slow. Her voice just the same.
We look at the clouds, chat about the risk
of heavy rain and rising water. I don’t tell
her but lately, I flood more than I float.

I think when she looks at me, she already knows.

We discuss an indie film: in it, the people
stay connected to the spirit world to survive.
They don’t become the violence. She says,
you won’t beat it that way. And I know.

But I forget.
​
We leave the trees. A blue sky breathes.
She’s looking down when I see a rainbow.
We rest in its colors. She tells me: wow,
I wouldn’t have seen that if you weren’t here.
You’ll have to figure out what it means to you.

I’m still sorting through what rainbows represent.
And I’m not done in the storm just yet.
There is too much water but also, never enough. 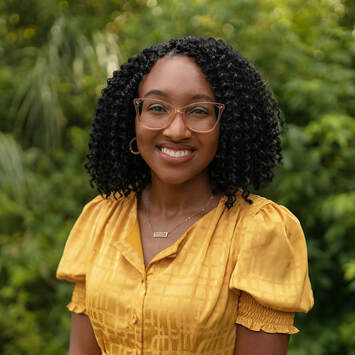 Jasmin Lankford is a writer and world wanderer from Florida. She works in social media marketing and hosts a travel video series. In addition to Pushcart Prize and Best of the Net nominations, Jasmin’s poetry has either appeared or is forthcoming in Parentheses Journal, L'Éphémère Review and elsewhere. Jasmin is in the process of publishing her debut poetry collection. She studied Creative Writing in France at the American University of Paris and graduated from the Zimmerman School of Advertising and Mass Communications at the University of South Florida.
Art: Untitled, Amber Tattersall
Powered by