Anthology of Unasked for Plans

In the anthology of unasked for plans,
filed under Cancer, subsection: not mine,
I have to put my father-in-law
standing at a window last winter,
unwilling to consider the country of wounds
to which his body has already
purchased its ticket.
He cancels what he can:
the second opinion, the limo set up
to get him there, his wife who wants
to sit and hold his hand,
even the phone call with his sons
that was meant to follow, their grasping
for options, their desperate love.

In the kitchen the TV is tuned to the news:
where a mob has stormed the Capitol
propelling leaders to their knees—
a loop he half listens to. “Jackasses” he says
and the word feels good, feels warm as it moves
through his mouth, so he says it again:
“jackasses” this time meaning the surgeons,
perhaps even his sons, as much as the mob
smearing their feces on the walls.
Or maybe he means his own body:
the spectacular failure his organs are arranging,
his pancreas leading the way,
wearing its plum-veined scarf of tumor,
terrorist desecrating everything within reach. 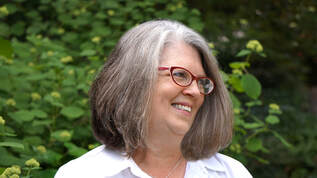 Lisa Rhoades is the author of The Long Grass (Saint Julian Press, 2020) and Strange Gravity (Bright Hill Press, 2004). Individual poems have appeared at Barrow Street, Poetry East, Saranac Review, Louisville Review, and Psaltery&Lyre among others. She holds an MFA in Writing from Columbia University. In addition to teaching poetry, she works as a pediatric nurse in Manhattan. She lives on Staten Island with her spouse and their children. ​
Art: Yuno Shiota, 『無題』 Mudai  Untitled, 286 cm × 205 cm, acrylic and oil pastel on paper, 3.14.2022