Ideas and feelings inside that are difficult to understand and articulate ... lend themselves to biomorphic and/or abstract imagery.

​
West Trestle Review was introduced to Madge Evers' spore prints in August, 2021, when West Trestler Kathryn Petruccelli wrote about Evers in a Cross-Tie. In an art essay for Antennae: The Journal of Nature and Visual Culture, Evers writes, "The dusty spores conjure fungi’s powers, honed over eons, to pave the way for plant life, to heal and nourish us, and, in some cases, to blow our minds." We were delighted when Evers agreed to share her art with us, and we originally scheduled the work to be published in the July / August issue. As we were building the summer issue, though, we realized that the artwork felt very autumnal. We decided to postpone, and it was the right decision. Each piece you'll find here, in addition to shining its own magical beauty, accentuates the mysteries buried deep within the text it complements. Our minds are indeed blown.
Patricia Caspers: Thank you for sharing your unique artwork with West Trestle Review. Could you tell our readers about the process you use to create these images?

Madge Evers: Inside the gills and pores of mushrooms are millions and millions of tiny seed-like spores. When ready, a mushroom will release those spores with the intention of spreading its genetic material around to a suitable substrate. Different species of mushrooms have different colored spores; mycologists and foragers use this to help with mushroom identification. In the process, called a spore print, one places a mushroom gill or pore side down on a sheet of paper, often covering the mushroom with a glass or bowl so that the spores fall straight down onto the paper. After several hours, the mushroom is removed and the spores remain on the paper, often with photographic-like detail of a mushroom’s gills or pores.

I cultivated, then began harvesting mushrooms in my garden in 2015, and used the spore print process, one with which I was familiar, to make sure the mushrooms I was about to feed my family were Stropharia rugosoannulata, rather than a poisonous look-alike. When I made and then saw the first spore print created with my homegrown mushrooms, I was profoundly inspired. It was sculptural and photographic and tapped into things deep within. And so, in a process that is experimental and constantly changing, I’ve adapted the mushroom spore print in form and media to make works on paper.

PC: I didn’t know mushrooms could be identified by their spores. That is so cool! Your spore prints at times appear galactic and at other times appear oceanic. Is that what you mean by, “things deep within”? The interconnectedness of the universe? Or something completely different?

ME: Yes! The interconnectedness of the universe and everything in it sums it up! Also, I meant the ideas and feelings inside that are difficult to understand and articulate but that lend themselves to biomorphic and/or abstract imagery. I was a photographer back in the day but stopped making pictures to put my creative energy into teaching, parenting, gardening. The epiphanic spore print reignited the impulse and desire to create images.

PC: How much control do you have over the end result of each piece?

ME: I can’t completely control the spores and feel that my work with them is a collaboration. I often change a piece that isn’t speaking to me with additional layers of spores or by putting it away and then revisiting it at a later time.  I now sometimes use the cyanotype process and pastel in my work and when I do, I have greater control in the end result.

PC: Do you ever have failures?

ME: Oh yes! Sometimes the mushroom deliquesce–they dissolve on the paper and make a mess. Other times they release no spores…perhaps they already let them go or they just don’t want to share with me. I try all sorts of weird things, many of which are failures.

PC: Tell me about your collaboration with West Trestler Kathryn Petruccelli.

ME: A few years ago, Kitty wrote a poem in response to This Is Your Hometown. Her interpretation gets at “things deep within.” I was thrilled by her ability to weave a narrative and make connections … and in awe that she does it with words. A few months ago, we began sharing and responding to each other’s work. Kathryn’s poetry is often about the many things within a large idea or event. Her poem ‘Ladybugs’ is about the war in Ukraine but also about the middle-class life in the United States. I responded by creating abstractions with cyanotype chemistry and gold gesso. Collaboration is complicated; it sometimes comes easily and sometimes does not.
​
PC: I love the challenge and inspiration in a collaboration. I can't wait to see where it goes!
September / October, 2022 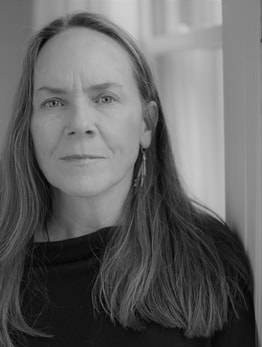 Madge Evers is an educator, gardener, and visual artist whose work celebrates decomposition, regeneration, and transformation. Referencing photosynthesis and the ancient collaboration in mycorrhiza, her practice involves foraging for mushrooms and plants, and sometimes includes the cyanotype process or paint or both. She has exhibited her work throughout New England; her New Herbarium series will be shown at the Brattleboro Museum and Art Center in October of 2022. In 2021, she was a Mass Cultural Council fellowship finalist in photography. After teaching for 25 years in Rhode Island and Massachusetts public schools, Madge now works as a full-time artist.
Art:  Madge Evers.