​surrounded by
nobody. Perhaps an echo or two,
of a girl, of a boy. Hums of guitar strings

thrumming in the air. The oxygen
in the air didn’t enter his veins
fast enough.

Not entirely the oxygen’s fault.

My father used to smoke. Cigarettes,
military green. The brand: Apple.
As in, the apple doesn’t fall far
from the tree,

no matter how hard it tries.

I don’t like the way my father died.
Loveless, alone. As the world he knew
crumbled into smoke, ဒို့အရေး ဒို့အရေး

but only for the living.
He is survived by his living
daughter, loving son.

I know. I write too often
about the dead. My father is
a bullet point, marked important,
asterisked, abandoned.

At least he did it first. 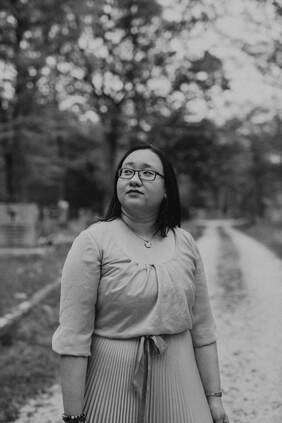 Mandy Moe Pwint Tu is a writer and a poet from Yangon, Myanmar. Her work has appeared in Longleaf Review, Tint Journal, perhappened mag, and elsewhere. She holds a Bachelor of Arts in English from the University of the South and is an MFA candidate at the University of Wisconsin at Madison. She is also a Thomas J. Watson Fellow. Find her on Twitter @mandrigall.
Art: Untitled, Amber Tattersall