Out of my past flew a crow,
its wing broken, its wing blue-black as ink
that wrote the dreams it wove from the stones
and rolled their code in the mud.

When the crow slept on the ground, it came to love
the rock that was its bed, the stone that was
its head, the sky hung upside down over the field,
and the rivers that bent their way toward a hollow moon.

I first saw the fields in a dun-brown cloud, the early winter
like a sleep that had come over me, my eyes certain
that all was ocean, roughed by storm. But later, I saw the stones
had heaped themselves like gods across the land. A crow

with a broken wing standing at the road, watching us
as we walked the fields, as we poked the frost with our boots.
We could live here, I thought. This broken earth.
This land of hard hard rock. We could plant and make things soft

or come to ruin, right here. The crow hopped on
its singular path down the road past the barrens.
Where the back is broken, love can grow. Where the land
is broken, the cold comes and makes of it a coat. 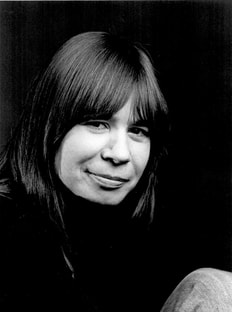 Judy Kaber is the Poet Laureate of Belfast, Maine, as well as author of three chapbooks: Renaming the Seasons, In Sleep We Are All the Same, and A Pandemic Alphabet. Her poems appeared in such publications as Poet Lore, Atlanta Review, december, Hunger Mountain, and Spillway.
Art:  Madge Evers.