I used to watch the boys dribble basketballs at recess and marvel at their light, raucous freedom. They wore dirt
smudges on their necks, bruises on their shins, sweat marks on their t-shirt sleeves like I once had. Like me, they had
scaly elbow scabs and crooked teeth, only I had learned to cover mine with long sleeves and closed-lipped smiles. A halo of hair fuzzed their legs; their voices made high music in the same register as mine. At that age, we shared one body. What did it mean, then, that I thought they were too beautiful for me?

I would open my eyes sinkhole wide in hope that they would fall in, but no one even got close enough to twist an ankle. My mute pining was so consuming--carefully timed trips to the water fountain, gym class calculations to ensure a spot on my desired team, elaborate scaffolding underpinning each daydream--that I felt engaged in a hot pursuit. At eleven, hungry with desire, I mistook salivating for eating and filled my stomach with the empty images I collected on the blacktop.
*

He didn’t see me seeing him.

The afternoon sun was hot on the red track as our coach gestured the day’s workout into the air. I was hovering at the edge of the group, a silent, skittish freshman, when I noticed the boy looking at my legs from across the circle. His gaze was curious, pointed, and so unselfconscious that he can’t have known he was staring. After a moment, he shifted his own leg into a slant of sunlight and glanced from his calf to mine, then back.

I followed his eyes down my body and understood: in the light, my leg hairs gleamed golden, twinkling on every facet of my skin. The pale, wiry strands that were nearly invisible indoors seemed to catch fire in the sun. I had always liked their glimmer. But I had never seen anybody else see it.

He rolled his leg from side to side, taking in the play of sunlight over his hair, then stared at my skin again, fascinated. Our legs looked the same. He wrinkled his nose. Our coach droned on over our heads, but down in the undergrowth, at the level of my bony knees, the world was shifting. No boy had ever looked at me for so long. As I watched him digest my appearance, I burned with shame.

After that, I spent my time hopping from one pool of shade to the next: trees, bleachers, telephone poles if I could align my body flush with their beams, and even the dark bars cast by other girls’ smooth legs. I ached to be invisible. As the June solstice neared and the shadows shortened, I resorted to shaving. The first time that I nicked my ankle and blood ran into the bathtub, I pressed a wad of toilet paper to the cut and squeezed my eyes shut, but I could not stop seeing his eyes flitting from his leg to mine, from his leg to mine, our hairs glinting with the same shine I was now blotting out. Every time I lifted my hand from the cut, it welled red again.

I often left scraps of bloodstained tissues in the bathroom trash can, tiny flames in my sacrificial pyre to hairless legs. Since I couldn’t be entirely invisible, I would do visible right: shins so shiny they reflected the light, lashes curled enough to kiss my browbone, nails as long and tapered as almonds. At first, I was afraid of what my products promised: Seduce him! Mwah mwah lips! He can’t look away! Showstopper! But I came to love them because they had the opposite effect. Smooth skin doesn’t sparkle in sunlight; it was what I hadn’t done before that made boys stare.
Someday, I imagined, I’d be in bed with a boy and he would be enchanting, frightening, foreign to me with his hair, his height, his unplucked lip, his scuffed knuckles, his broad laughter. I saw us in our complementary dichotomy, two strangers delighting in their differences.

I quit shaving temporarily each winter, like everyone. The jokes in response to a compliment: Thanks, but there’s a gorilla under these leggings! Ha, ha, it’s funny to be ugly if no one can see it.

One year, I let the hair grow longer than usual. I wanted to see what my body could make if I left it alone. It was like watching an artist finally given the peace to work: long, fine hairs that stuck out at right angles to my skin after years of being dragged against their grain. I hadn’t seen them since I was a child; I had forgotten. I loved their spindly length and coarse persistence under my pants, the way they shivered in a breeze and told me new stories about my world. I could sense, by the bending of a hair, any object that came within an inch of my skin. I could see better.

But someone would see. So I shaved, cut myself into tiny, glinting pieces that fuzzed over the shower drain after weeks of growth.
​
Each spring, the razors dragged a little heavier, their weight harder to pull up my legs. The blades dulled my senses. Boys talked and I couldn’t hear what they said over the screechy sensation of my pants directly on my skin. People flittered past and I couldn’t see them, couldn’t tear my eyes from my own body. I only peered into other faces to check that my own was okay. I couldn’t remember the last time I thought anyone was beautiful.

One day, with my leg up on the edge of the tub, I looked down and my body wasn’t there. I had done this for so long, I had either gone blind or invisible. Was it the same thing?

I could quit for real. I could see again. As my hair grows, my senses will sharpen. I will hear the voices of boys as they pass; feel the air stirring around my skin; taste my own hunger.

I want to go back and lift my eyes to that boy on the red track, stand with my legs in full sunlight, and say, You and I, aren’t we beautiful? Aren’t we the same? Aren’t we like brothers?
​
Someday, I imagine, I’ll be in bed with a boy and he will not be foreign to me because we will share one body: sweat marks, crooked teeth, haloes of hair. I see us in our shining similarity, two glimmer-legged kids at recess.
​
But the vision blurs as water swirls over the drain and the gleaming shards of my hair spin away. I blink; there is no such bed, no such boy. I couldn’t quit for real. Instead I straighten, rinse my razor for tomorrow. I’m so good at this now, I never bleed anymore. 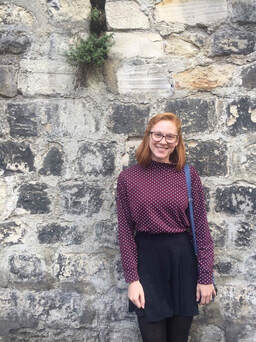 Claudia Schatz (she/hers) lives in New Haven, CT, where she reads, writes, and makes the storytelling podcast Rearview. Her writing has appeared or is forthcoming in Euphony Journal, Artifex Magazine, Five on the Fifth, The Hamilton Stone Review, Green Hills Literary Lantern, and Blue Earth Review. She is training for a triathlon.
Art: Public Domain
Powered by