In mid-July, with their belongings in a truck, Harvey, Johnetta, and their two children drove down Cermak Road to their new place, past a sign that read “Welcome to the Best Town in America!” The main street bustled with people, but not another Black person in sight. Johnetta squeezed Harvey’s hand, always the optimist—one of the reasons she loved him. Most times she could tap into his hope, but this drive had her stomach in knots.

People stared when the Clarks stopped at a red light. Harvey gave a polite smile and a small wave. Johnetta stared straight ahead, a prayer in her mouth: “Dear God, please protect my children.”
​
Johnetta had dreamt of fire the night her husband told her they were moving to Cicero.

“We can’t afford to live in the South Side or any side of Chicago. The rents are cheaper there,” Harvey announced. He was tired of sharing a two-bedroom apartment with another family. The money he made as a bus driver would be enough for an apartment in the suburbs. Even if the place was small, it would be theirs.

“Al Capone’s Cicero? The all-white town Cicero?” Johnetta was aware of what happened to Black folks in sundown towns.

“Yes, that Cicero. I found us a nice place.”

“Cicero?!” Johnetta placed her hands on her slim hips. “They know we’re Black?”

“Yes, Johnetta. They know I’m a vet and a hardworking man. Times are changing, baby. It’s going to be good,” Harvey kissed his wife’s forehead. When the building owner in Cicero agreed to rent to them, Harvey believed easier times were ahead.

Their new block was tree lined and quiet. Harvey pointed at a window of a brick building that took up half the block. “That’s ours,” he jiggled the keys at his daughter’s face, and she giggled. Her curled hair bounced as she scampered toward the entrance of their building.

The truck bed was barely opened when a Cicero police car pulled up behind them. Johnetta’s heart raced, “Children, come here!” Johnetta smiled, lips closed, afraid showing her teeth would be seen as a threat. Her son squirmed and she squeezed him tighter, wishing there was a way to put both of her children back inside her until it was safe.

“You must be Harvey Clark,” the tall police officer said as he walked toward the family, hand on his gun. Harvey reached out to shake the officer’s hand but was spurned. His partner, a shorter, heavier fellow inspected the Clarks’ truck, tapping his baton along the tires and metal frame. “You’re in the wrong town, boy.”

Harvey’s chest tightened. When he was abroad, at war, they taught him that if he wanted to come home alive, he’d have to shoot first, ask questions later.

“Hooah,” Harvey saluted, hoping the happy-trigger-looking officer had also been in the army and would recognize a fellow soldier.

“Hooah,” the tall Cicero police officer said but he didn’t salute or take his hand off his holster. “We’ve told the building owner already, so now we’re telling you. Leave now and we’ll be good. Move in and you’ll end up with a bullet in your head, you dig?”

When he returned home from the war, Harvey believed he’d be treated better. He was no fool. It wasn’t like he didn’t experience racism while abroad, in his own infantry. But he had hope, that after laying down his life for his country, something would be different.

With nowhere else to go, the Clark family spent their first night in their Cicero apartment huddled together in Harvey and Johnetta’s bed, a dresser against the front door. It felt like a long time since her children wanted to bury themselves in her body. It was an eerily chilly July night. Most of the month had been blistering hot, even when the sun went away, the nights remained humid and sticky. But on their first night, the wind howled.

Johnetta dreamt of fire. From their window, she saw the mob of white people approaching their building—their flame torches lit the night. Someone banged on their apartment door, yelling, “Harvey, y’all need to get out, man!”

As the mob got closer, Johnetta recognized the faces of the officers, of the women out on Cermak Road from earlier in the day. Even the round, chubby faces of the children seemed familiar. There were thousands of people outside her building. They were surrounded. A firm grip pulled her away from the window. She assumed it had been Harvey, but she could not make out his face.

“We need to go!” the man who was and wasn’t Harvey yelled.

“I’m so tired, Harvey.”  Despite the jeers and threats of the white mob outside, Johnetta felt a wave of exhaustion wash over her.

They went out through the back of the building. The chanting and the screaming got louder: “Whose town? Our town!”

From the corner of the block, Johnetta saw their furniture, their clothes, their children’s toys fall from the windows. Her life’s belongings fell as slow as feathers. The scarf her mother had given her, glided down and tenderly hit the ground before it was trampled by the men’s boots as they rushed the building.

The upside down piano burned brightest in the dark sky. The flames reached for the tree, the dresser, the bench—ravenously claiming them. A chair and then another flew from the window and landed with a crash. The women cheered with every crack.

“Johnetta! Johnetta!” She heard her name, but Harvey was nowhere to be found.

“Harvey?!” She yelled as the building went up in flames. The heat was suffocating.

“Johnetta, we need to go!” She heard but couldn’t trace the voice. The trees on their block were now giant torches. The scorching heat made it harder to breathe. She extended her hand to the flames and its coolness surprised her. 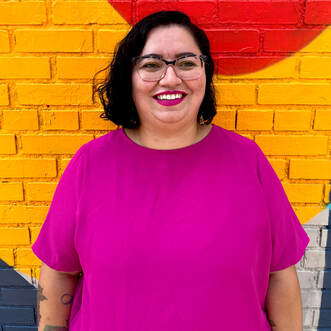 Sonia Alejandra Rodriguez (she/they) is a writer and educator living in Queens, New York. They are a Mexican immigrant, raised in Cicero, Illinois. Their stories have been published in Strange Horizons, Acentos Review, Longreads, Okay Donkey, Reckon Review, Mixed Mag, HAD, and elsewhere. Sonia's writing has been nominated for a Pushcart Prize, Best Small Fiction, and Best Microfiction. Follow them on Twitter @RodriguezSoniaA.
Art:  Madge Evers. A Soft Spot. Mushroom spores on paper.