Slowing Down
​with
​T. Aguilera

​
Folds of a wrap draped around a woman's shoulders, the tender look in lover's eyes, water mirroring itself, sunlight filtered through a golden curtain—these are the details that drew us to T. Aguilera's work, but we were equally intrigued when we learned that her nickname is Tartaruga. Read on to learn more about Aguilera's nickname, philosophy and passion in art and life.
Patricia Caspers: Would you tell our readers how you came by your nickname: Tartaruga?

T. Aguilera: In Portuguese, tartaruga means "turtle." It began as a joke at school. Even at 15 I had a—let's say—more relaxed way of life. Never liked to rush, always needed time to come back from my inner world to respond to anything happening in the real world. My friends started calling me Gody (after a chocolate turtle they sold at the time). With time I embraced my inner turtle. I like living a slow life.

PC: Do your create artwork slowly?

TA: Yes. Some paintings can bet finished in a day (though I work mainly with oil, which needs time to dry), while some take months to be completed. I think art in general is a slow occupation, be it painting, glass or literature.

PC: Where do you find inspiration?

TA: I'm a very visual person. I see an unhoused woman at a bus stop in São Paulo or canola fields in England, and I want to paint them, so I take pictures on my phone. I also stalk my friends on Instagram and ask permission to paint their pictures. It's like something goes in through my eyes and comes out through my fingers.

PC: I'd love to hear about the inspiration for Valentines, the cover art for the issue.

TA: I was once in a café and saw a couple obviously on a first date. They were a man and a woman. They were both very shy, and he kept gazing at the girl longingly, but always when she wasn't looking. I have no idea if they had a second date, but the scene stayed with me, and, as St. Anthony's day approached (we celebrate love on June 12th in Brazil) artists began to post pictures about love, and I felt like painting something too. The original couple was a white man and woman, but I am very conscientious about creating diversity, so I changed the scene to be more inclusive.

Artists should paint more BIPOC people, paint more LGBTQIA+ people. Make everyone more visible everywhere, so no one can try to erase their rights. I mean, if you can imagine people different from you sitting at a table beside you; if you have seen it in a painting or a movie, it won't be so shocking when it happens in real life. People have difficulty accepting what they don't know. So let them know.

PC: I love that philosophy, and it seems particularly fitting that, by coincidence, we paired Valentines with V.A. Bettencourt's, "Cinderella Sets the Record Straight."

How have your travels influenced your art?

TA: I lived in Germany for a year and in the UK for four years. In the UK I studied creative writing and lived a writer's life (except for the part where I had to have a job to pay the bills). I am a writer. But I'm also visual, so I wanted my texts to be illustrated, but it was too expensive to hire someone to do it. Since I've always liked drawing, I decided to illustrate my stories myself. That's what got me back to drawing, which in (very short) time got me into painting. I guess you can say that living abroad affected my art in the way that it made my art possible. Or rather, it made doing anything else impossible for me. After I started writing in earnest, I couldn't go back to writing only as a hobby. After I started painting in earnest, I couldn't stop. I can't stop. But maybe I wouldn't have had the courage if I hadn't left home to find myself. Even in Germany (in 2004), I spent most of my free time writing and dreaming of being an artist. After Scotland, the dream became a necessity. When my visa expired, and I returned home to Brazil, I tried to go back to the life I had before. I finally understood how a person could lose weight from sadness. No matter how hungry I felt, I simply didn't feel like eating. I decided to make it work somehow. I would write. I would illustrate. Now I paint. If I am to starve myself, let it be because I tried to live off of my art, and not because I'm depressed.

PC: Yes! So many of us can relate to that! Thank you so much for sharing your artwork with WTR.
This interview has been edited lightly for clarity.
November / December, 2022 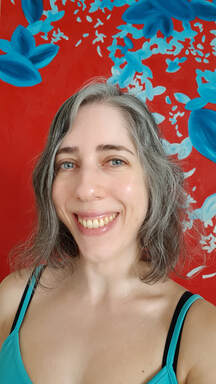 The "T" in T. Aguilera stands for Tartaruga, which means "turtle" in Portuguese. It has to do with Aguilera's "speedy" way of life. Perhaps it is why Aguilera likes oil painting so much: it takes time and a lot of patience, but the result is worth it. Like writing. Aguilera is a writer as well as a painter. Aguilera wishes to explore many more art languages, but with the time of only one human life, can sometimes dip a toe in ceramics and glass. Aguilera was born in São Paulo, Brazil, in 1980, and currently resides there.