I park at the village square. It wasn’t difficult to find: I take a right from the highway and drive a few miles on a road that had not been tarred for a year or two, and there it is, a big aahot tree, a couple of children swinging on its roots, a weather-beaten plastic chair lying next to it. I park some meters away, respectfully. The only other vehicles I can see are a bicycle and a handcart, whose owners may have left them here a few minutes or months back, I can’t tell. There is a strange time-standing-still air to this place, like I’ve stepped into a portal to the past. I ask the children where the wedding is, and one of them points to the lane on my right. I walk off. It is quiet, so quiet. I began to wonder if she misled me, unintentionally or deliberately. Children are supposed to be wise.

But now I hear something. A drum. Abruptly, all is drowned in a loud Hindi film song, one of the new dance songs. It invades the silence, the fields, the overgrown bushes and weeds, the reticent old houses set back from the lane, the hills in the distance. It’s disrespectful, brash, defiant. New.

And there it is. A house bigger than any I have yet seen in the village, children chasing each other in the lane, a large courtyard full of people, and on the pillars by the grilled iron gate, speakers. I can’t imagine how they hear each other, but muffled by the noise are voices—banter, laughter.

I see her. White mekhela sador with yellow patterns in the weave, determinedly demure and old-fashioned against the bright sarees and mekhela sador and shirts around her. Hair darker than night, than nothingness—they say evil is dark, but they are wrong; evil is bright and multi-colored—too black to shine, falling straight to her shoulders. No bangs, no waves, no feathers. She could have been a bride from long ago, too poor to afford guna or gohona. No, a witch. Or a goddess.

A young man comes up to me and I explain who I am. The new teacher. I am welcomed in. I demur, but he insists. I am dressed like some of the boys, in my plaid shirt and jeans—only mine are faded from use—and my short hair and floaters.

I am taken in to meet the head of the household, and welcomed again, and introduced to more people—his relatives and friends. This rich man is the benefactor of the village school, my patron. I am here at his bidding.

I haven’t seen the bride—she’s being prepared in another room. The girl—young woman—in white comes in, and I learn she is my host’s niece, the daughter of his soft-eyed brother. Her austerity is self-imposed, then.

The next few days are both exciting and easy. I know how to do this, to worm my way into confidences, into lives, if not hearts. The smell of fresh stories has me pumped, words slide off my tongue, my toes tingle in anticipation. Every evening, as the villagers retire to their homes and turn on their TVs, I go for a long run to shake some of the energy off.

As I run, I pick and discard, I make and remake my decisions. That young man with the swinging hips and shy smile. The one with the wary eyes that hold secrets. And always, always, the girl.

Even though I’m barely older than the young people, the parents take me in as one of their own. I am a teacher, therefore wiser. My loose shirts and baggy jeans and old sweatshirts make me sexless. Trustworthy.

They tell me about their troublesome children. Grown people, yet more worrymaking than the little ones I’m supposed to start teaching in a few days, by reason of their adulthood, their youth. My son, one mother laments. My daughter, her father’s brows crease his soft eyes in worry.

I listen, and I offer—not comfort, exactly, but hope. Not succor—everything will be all right—but assurance—everything is as it’s meant to be. And it is.

So they tell me everything, these foolish middle-aged people. They pour out their precious seed-grains of secret worries as if they were fodder for cattle. I scoop them up, every grain.

When the first young man disappears, they are sure he has run away. He was always a restless one, his aunt says, shaking her head to hide her indifference. His mother weeps but seems unsurprised. Barely disappointed. She has younger, prettier, smarter children to focus on. I have reduced her worry.

The other young man, though, was popular. He danced like a demon, his handsome face and muscular shoulders drawing all gazes. It is not near Bihu yet, but someone showed me a video.

There is uproar. His mother beats her chest and wails, still-dark hair whipping around her like a hurricane. She is feeding on the attention. He was the best boy in the village, she says loudly. No one disagrees, not even the other mothers, not even in their heads. The father organizes another search party. He wouldn’t run away like that, the mother says. Why would he? We gave him everything.

After I bag the girl, I am almost sorry. Not for the deed itself, nor for the girl—why should I be sorry for her?—but for the parents. The father’s soft eyes melt into tears, yet they keep pouring from some inexhaustible source within the greying, but almost young, man. His wife holds her worry for her stepdaughter coiled within her slight body, her hands fisted so as not to let tendrils unwind as melodrama. She reaches out an arm and clutches her small daughter on the shoulder as she is running past. The girl yelps in pain.
​
I like living here. It is quiet, once the wails have died down, and the villagers accept me but do not intrude. After the first spate of questions about a possible husband or parents or fiancé, they do not ask again. They do not express sympathy for my aloneness; it seems fitting to them that a teacher should be a spinster, belonging to the village and not to a family.

I should have been content. But there is one more young man I want. He is slight, with eyes of a winter dawn. He has no talents except gentleness.

I find him on the crossroads on the other direction as the village square, where one track leads to the forest on the hill, one to the fields, and one to the river several miles away. He is coming back from the forest. It is dusk, the hour of evil. He thinks that dangers are behind him. When he sees me, he smiles in relief. I reach out and pluck him.

This time, when the police come, they are more thorough. They search houses. They question every villager. They come to the schoolhouse, and I give the students lines to copy from their textbooks and talk to the police on the playground. My concern is neighborly, suitably distant. No, I haven’t noticed anything, but then I hardly knew them. I am worried about their younger siblings, who are in the room behind me. Trauma can twist young minds. They ask, apologetically, to search my rooms. I hand them my key. What could they find? I have books and a bag of toys. Suitable for a teacher.

I hadn’t thought the soft-eyed man would be so shrewd. When I notice him behind me once or twice, I accept his explanation that he has taken to long walks after his daughter’s disappearance, a father trying to deal with his grief.

I never open the bag at night. Dark outside, light within: an easy way for anyone outside to see what I’m doing. I have curtains but they are white sheers: they came with the house. I make few changes to the homes I live in. I prefer my presence to be as light as possible.

So it is at dusk that he finds me, looking through my bag of toys. I look up and his eyes are on me. I don’t know how long he stood at the window. It’s hot and the fan has been blowing, driving the curtains apart. He moves to the door. I have latched it, of course, I always do, but the latch gives way before his body. I am surprised by his strength.

What have you done to them?

I am still sitting on the ground, and he towers over me. To whom, I say. I don’t shove the bodies back in. These are just dolls, made of rag and wood.

He kneels before me, but not in supplication. That is Topon, he points. And this, this is the other boy. And this… his voice breaks… this is my Meenakhi. I stretch out a hand, but he has already touched her, is tenderly holding her in both hands. She twitches. It is too late for lies.

His tears flow again, but he does not beg.

I have done them no harm, I say.
​
He does not answer. He cradles her against his chest, looking at me.

I have not harmed them, I repeat. I will not plead either. I have saved them from harm. They are happy. They live—they are not dead—I am reassuring now, my voice high—they live elsewhere. They are happy.

Bring them back, he says.

I have taken away their suffering.

He holds his daughter in the nook of his elbow, and with his other hand he touches the others. Not only the local village youth but all of them, from other villages, other towns.

Bring them all back, he says.
​
I cannot disobey him. I have never received a direct command before. I bend over the mud floor of my hut, and I cry. My tears need no incantation. They sink into the mud, infuse the floor with my salt. All the wooden figures begin to tremble. 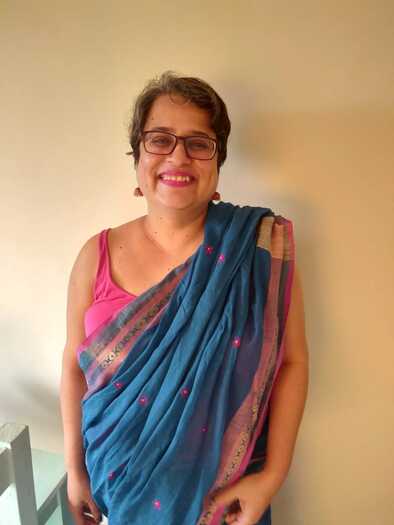 Unmana grew up in Assam, India and now lives in Mumbai with her husband. She has had non-fiction published online (in the Scroll, the Ladies Finger, and other publications) and in an anthology (Skin Stories, published by Point of View). These days, she is more excited about writing fiction.
Art: Untitled by Amber Tattersall
Powered by